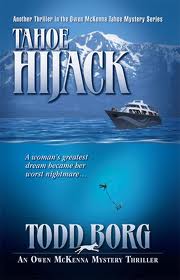 Now I’m hooked. One mystery is never enough, literary or noir, look-out-here-comes-a-bullet or the forensics of a TV crime show, this is fun, entertaining reading. Since it’s still summer, what could be better than a mystery with Lake Tahoe as its setting?

Author Todd Borg, who lives and writes at Lake Tahoe has written his tenth Owen McKenna mystery. Tahoe Hijack is a fast paced thriller that begins and ends aboard an expensive and expansive commercial yacht. Borg knows his milieu; as I read, every time McKenna entered or mentioned a well-known restaurant or bookstore I could almost hear every other reader familiar with Tahoe saying “Yes, great food,” or “Right, it’s got the best books.”

McKenna is a nearly perfect private detective. Low-key and amiable, he’s an early retiree from SFPD who shares his cabin one thousand feet above the lake with Spot, a loveable Great Dane. He often shares his cabin with his girlfriend, Casey Street, a loving, but independent woman who has her own condo at the bottom of the mountain. When Casey’s not in residence, Spot is there as man’s second best friend.

Borg does not shy away from a complex storyline and “Tahoe Hijack” has everything necessary to keep his readers on their toes. An anonymous caller has chillingly brought McKenna back to an old murder he had investigated but never solved in his last year with the SFPD. The murder of Grace Sun becomes the catalyst for a hijacking, a series of murders, abductions and other high altitude mayhem.

McKenna’s police background puts him good stead with the many law enforcement agencies located at Tahoe and in the surrounding area. Borg does not limit himself to Tahoe and readers will find themselves in the Bay Area as well, but the majority of the mystery unfolds in some very familiar waters.

Grace Sun represents more than an unsolved murder. Her death is the key to some very scary paramilitary groups who are after her daughter for a document they believe Sun gave to her before her death. It is believed the document tells of the location of gold buried more than a hundred years ago by Sun’s Chinese ancestors during the Gold Rush. Borg not only offers a good mystery, but does a terrific job with some fascinating California history that is both enlightening and gripping. Details about Tahoe itself give the boat hijacking depth and character.

Mystery readers tell me they love the ones that are hard to figure out. I thought I had McKenna’s man early on, but then I had to rethink it several times. Good mystery writers should be a bit like magicians, “Now you see it, now you don’t.” Borg has the timing and imagination to weave a believable tale of history, family, mystery, greed, and murder with more than enough “ah hah” moments to satisfy the most demanding reader. My guess is that many readers will put Todd Borg’s Tahoe mysteries in their year round travel plans.

Sunny Solomon holds an MA in English/Creative Writing, San Francisco State University. She is a book reviewer for “The Clayton Pioneer” and her poetry and other writing has been published in literary journals, one chapbook, In the Company of Hope and the collection, Six Poets Sixty-six Poems. She was the happy manager of Bonanza Books, Clayton, CA and Clayton Books, Clayton, CA. She continues to moderate a thriving book club that survived the closure of the store from which it began. Sunny currently lives next to the Truckee in Reno, NV.
More from this reviewer
PrevIn Her Hands The Story of Sculptor Augusta Savage
These is My WordsNext