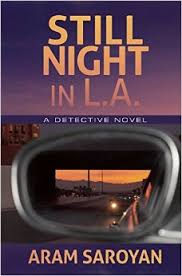 The techniques employed by a talented minimalist poet in order to craft a work of fiction are well worth discussing. Aram Saroyan has written a novella, Still Night in L.A., that moves one step further beyond the ambience of Raymond Chandler and the terseness of Raymond Carver.  Best-known for his poetry, Saroyan has written a story so crisp and so cryptic that the words almost sparkle on the pages.

Still Night in L.A. takes place in Los Angeles, opening in rather typical Chandler fashion.The main character, a hard-boiled detective not given to elaborating his thoughts or his feelings, is interviewing a young starlet who fears that someone wants to murder her. “I made it a handholding job,” Michael Shephard decides, “with maybe the possibility of more than handholding, if one wanted it, and felt a little guilty about taking my weekly per diem and expenses.” A few hours later, Shephard’s client is dead, and his guilt sets him off on an investigation that will take him to dark and intriguing California locales.

Meanwhile, elements of Shephard’s personal life appear—his ex-wife, his troubled son, a new girl friend, and even his relationships with the police force he left behind many years before.   All this sounds like familiar formula fiction, but Saroyan handles the expected by jolting the reader with the unexpected. Shephard and his ex-wife agree, for example, on how to handle their troubled son. When the young man gets a DUI, they respond with tough love and decide together not to bail him out. That’s different, I would argue, from more trite divorce disagreements a police procedural reader might normally expect.

Writing the last two paragraphs, however, I’m not doing justice to Saroyan’s talent because I’m conveying too much narrative coherence. His plotting and his prose contain sudden shifts and even lapses of logic. The results are staccato stutter-steps from one event to another, an almost-poetic structural tap dance. At one point, while sipping a sugared tea with a suspect, Shephard realizes that it seems as though his “eyesight was like a deck of cards being shuffled.”  Twenty-four hours later, he awakens in a hospital room, with his detective confidant and his secretary hovering nearby. How did he get there?  And what exactly happened? Saroyan never tells us.

But do we really need to hear the details? Or is it a sharper literary experience for the reader to fill in the blanks? “When I woke up again, the steel taste had gone from my mouth and I felt light. I lay in bed thinking that life was interesting, in that, unlike an old-fashioned battery that just ran down, a human being could be recharged.”  Another page, and Shephard has taken care of some backlogged paperwork, resolved another issue with his son, and now is back on the case of the murdered starlet.  And so the novella goes, jumping from incident to incident while using the sparest of verbiage.

Perhaps the clearest way to summarize Saroyan’s verbal technique is to think about the book’s title.  Still Night in L.A. What a marvelous double entendre for a novella noir.  I had fun playing with the layers of meaning, the possibilities, until I decided that actually writing down my musings for a “Bookin’ with Sunny” review would be totally antithetical to Saroyan’s creativity.  So I’ll just finish, with a Still Night in L.A.  – Ann Ronald

Also available by Aram Saroyan: Complete Minimal Poems; Rancho Mirage; Coffee Coffee; Day & Night Bolinas Poems; Door to the River: Essays and Reviews from the 1960s into the Digital Age; Artists in Trouble; Street an Autobiographical Novel; Starting Out in the Sixties; Friends in the World: The Education of a Writer, A Memoir; Genesis Angels; Last Rites, The eath of William Saroyan; Trio; The Romantic. 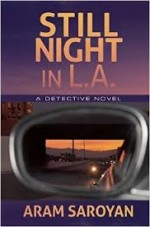 Ann Ronald is a retired English professor from the University of Nevada, Reno. Author of dozens of reviews, she’s also written a number of books about the American West. They include literary studies such as The New West of Edward Abby and Reader of the Purple Sage, cultural studies such as GhostWest and Oh, Give Me a Home, and nature writing such as Earthtones: A Nevada Album. Her latest is a work of fiction, Friendly Fallout 1953. Since retiring, she’s been reading vociferously, so “Bookin’ With Sunny” is giving her a wonderful opportunity to share thoughts about her favorite new discoveries.
More from this reviewer
PrevMy Pantry
Americanah – A novel approach to the Black experience in AmericaNext