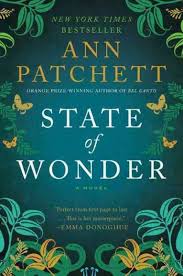 Truthfully, I never ever have wondered what it would be like to delay menopause forever. It certainly never has occurred to me to want to be able to get pregnant until well into my seventies. And I can’t imagine wanting to purchase a drug that would make such ongoing pregnancy possible. Ann Patchett’s novel, State of Wonder, posits just such a situation. The first part plunges the reader into a laboratory world of pharmaceutical research and drug development, while the heart of State of Wonder takes us into the Brazilian jungles where a team of scientists is hard at work. The women of one small native tribe are getting pregnant, over and over again, throughout their long lives. How can this happen? And how might a drug company profit from discovering the Lakashi secret?

Dr. Marina Singh, a physician-turned-Ph.D. researcher, works for Vogel Pharmaceutical. The company sends her office-mate, Anders Eckman, on a quest to see what is delaying the hush-hush Lakashi research project. When news filters back that Anders has died from some unnamed jungle fever, the bureaucrats then ask Marina to follow his footsteps to Brazil. Anders’ widow, who finds her husband’s apparent death surrounded in mystery, also urges Marina to make the journey. And so Marina embarks, first seeking the top-secret Vogel-Lakashi research field station and then searching for Anders’ body.

State of Wonder occurs wholly inside Marina’s center of consciousness. We see all the action through her eyes, we experience the events as she undergoes whatever happens, and we interpret the deeds of the other characters as she understands their motivations. The narrative of State of Wonder unfolds slowly because Marina’s comprehension takes time to grasp the situations in which she finds herself. It takes a while to finds the Vogel researchers and the Lakashi tribe; it takes even longer to uncover exactly what the scientists themselves have been discovering. It also takes time to make connections with the Lakashi people plus, of course, adjusting to jungle life itself is not quickly accomplished.

Voracious insects, fire ants, malaria, anacondas, and lethal vipers are only a few of the hazards. The nearby Hummocca tribe is dangerous, perhaps cannibalistic and certainly equipped with poisoned arrows. Fields of hallucinogenic mushrooms abound in the midst of a mysteriously medicinal stand of trees. And the practices of scientific research, medical care, and surgical imperatives are conducted under extremely primitive conditions. Sometimes Marina, who finds herself immersed in a totally unforeseen environment, can hardly believe her own experiences.

Strangely coincidental, the director of the Lakashi research was Marina’s mentor in medical school. A woman now in her seventies, Dr. Swenson models the kind of career woman Marina might become. So Marina, in her forties, not only is surrounded by medical and scientific inquiry, she also is constantly considering her own professional path to the future. How and where does she see her own career proceeding? And does it involve pregnancy, even late in life?

If this skeletal description of State of Wonder doesn’t pique a would-be reader’s interest, I don’t know what else to say. The novel is a marvelous blend of science and psychology. It also field tests a woman’s moment of truth, when the personal and the professional clash and/or coincide. Marina’s solutions are most satisfying, I think, but getting there takes both physical and psychic energy, a lot of it.           – Ann Ronald

Also available by Patchett: This is the Story of a Happy Marriage; The Patron Saint of Liars; Bel Canto; Truth and Beauty; Run; The Getaway Car; The Magician’s Assistant; What Now?; Taft;

Ann Ronald is a retired English professor from the University of Nevada, Reno. Author of dozens of reviews, she’s also written a number of books about the American West. They include literary studies such as The New West of Edward Abby and Reader of the Purple Sage, cultural studies such as GhostWest and Oh, Give Me a Home, and nature writing such as Earthtones: A Nevada Album. Her latest is a work of fiction, Friendly Fallout 1953. Since retiring, she’s been reading vociferously, so “Bookin’ With Sunny” is giving her a wonderful opportunity to share thoughts about her favorite new discoveries.
More from this reviewer
PrevA Soldier of the Great War
The BohemiansNext