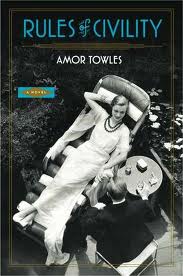 As I read books for “Bookin’ with Sunny,” I realize that I’m always trying to put new publications in the context of the old. How does an author fit with his predecessors? How has he or she fallen short or moved beyond the masters’ acknowledged achievements? When I think of Amor Towles and his new novel, Rules of Civility, for example, I fondly remember his literary forebears, Edith Wharton and Henry James. They, of course, were describing social intrigues of more than a century ago, while Towles is focused on New York in the late 1930s, but all their characters move in the same moneyed circles and follow a tacit code of conduct. In an urban landscape controlled by finance and breeding and culture and aspirations, everyone acts and reacts according to an unspoken set of “rules of civility.”

Towles goes beyond the unvoiced, however, by printing a schoolboy’s version of the code, George Washington’s Rules of Civility & Decent Behaviour in Company and Conversation, by giving his characters access to young George’s axioms, and by holding them accountable. The 110th rule turns out to be the most important in Towles’ New York. “Labour to keep alive in your Breast that Little Spark of Celestial fire Called Conscience.” Some of Towles’s characters manage to achieve that goal, some do not, and therein lies the tale.

Since I have been a fan of Edith Wharton and Henry James for half a century, I was bound to adore Rules of Civility. Towles actually surpassed my expectations. His characters are deeply subtle, with complex interactions and nuanced behavior. Every scene is a new surprise, as facile men and women traipse up and down the Gotham and Long Island social ladders. Important to the landscape, too, is the historical context. America is climbing from an economic depression into the soon-to-be chaos of European and Pacific wars. As a counterpoint to history, Towles also introduces contemporary art and music, setting the smoky nightclub chaos of jazz riff innovations alongside the black-tie milieu of Russian ballet.

Towles himself is innovative, too. The essential storyline of Rules of Civility follows the course of a single year and is divided into seasonal parts—Wintertime, Springtime, Summertime, and Fall. At the close of each section, Towles sets a single climactic chapter in italics. Each time, that chapter propels the narrative forward in an absolutely unexpected way while simultaneously revealing problematic events, deep-seated character flaws, and ambitious motivations. After I finished the novel, I actually returned to the italicized parts because there I could revisit the bittersweet pattern of the plot. It’s remarkably well done.

Along with applauding Towles’ underlying structure, I would also point out his finesse when using language. One example will have to suffice: “In the apartment next door, I could hear the Zimmers sharpening their sarcasm. Over an early dinner, they were chipping away at each other like little Michaelangelos, placing every stroke of the mallet with care and devotion.” Henry James never described marital discord any better.

If you like James and Wharton, you will especially enjoy Rules of Civility. But if you remember Towles’ predecessors from stodgy classroom lectures, and expect the same dull elongated sentences from this book, you’ll be wrong. On the contrary, Rules of Civility updates the manners genre in lively ways. His prose positively sparkles, and his characters shimmer in shades of light and dark. Indeed, Towles himself follows George Washington’s 88th rule: “Be not tedious in Discourse, make not many Digressions, nor repeat often the Same manner of Discourse.”            – Ann Ronald

Ann Ronald is a retired English professor from the University of Nevada, Reno. Author of dozens of reviews, she’s also written a number of books about the American West. They include literary studies such as The New West of Edward Abby and Reader of the Purple Sage, cultural studies such as GhostWest and Oh, Give Me a Home, and nature writing such as Earthtones: A Nevada Album. Her latest is a work of fiction, Friendly Fallout 1953. Since retiring, she’s been reading vociferously, so “Bookin’ With Sunny” is giving her a wonderful opportunity to share thoughts about her favorite new discoveries.
More from this reviewer
PrevCloud Atlas
If There is Something to DesireNext