Successful historical novels draw the reader into a bygone milieu, bringing historic characters to life while describing colorful scenes of long-ago events we only can experience second-hand. Queen’s Gambit, by Elizabeth Fremantle, without question, is a successful historical novel. Set in the waning days of Henry VIII’s reign, it details the course of the monarch’s final marriage. Katherine Parr was Henry VIII’s sixth wife. I must admit I knew little about her when I began reading this novel, for the more notorious wives like Anne Boleyn tend to occupy center stage. It turns out that Katherine Parr is most intriguing, and that Queen’s Gambit does full justice to her complexities and her contradictions.

Unlike Henry VIII’s previous child brides, Katherine was a mature woman, twice married and twice widowed. When the king decided to marry her, she already was in love with another man, Thomas Seymour, brother of the king’s third wife. Since the king’s wishes always prevailed, Katherine became his wife, and Seymour promptly was banished from the court. Throughout his life, Henry VIII was a mercurial man, but as he aged his whims grew increasingly unpredictable. Watching Katherine fight for her very survival and reading about her manipulations of her erratic spouse makes the palace intrigue seem Machiavellian indeed.

Fremantle chooses to tell Katherine’s story through several different voices. Katherine’s predominates, but counterpoint observations offer telling insights. One especially effective balancing voice is that of Katherine’s maid, Dot, a savvy farm girl who surreptitiously learns to read and who, surprisingly, becomes a trusted confidante. A second confidante is Huicke, a young doctor sent by the king to spy on Katherine who soon becomes more loyal to his friend than to her husband. Other characters share the limelight. Even though we don’t view the action through their eyes, we learn to know them well and we see them in perspective. Elizabeth, daughter of Anne Boleyn, for example, learns a great deal from the only mother she will ever know, Katherine Parr.

Even more fascinating than the characters are their intellectual leanings. Katherine was quite learned. Not only did she speak and read several different languages, but she also thought most seriously about the philosophical conflicts between the Catholic Church and the embryonic Church of England. She secretly studied Luther and Calvin and Galileo and Erasmus Darwin, slipping her interpretations into conversations with the king and trying to slant his mind in more liberal and more progressive directions. Katherine actually published three books in her lifetime, the first Queen of England to do so, and she seems to have been responsible for the intellectual precocity that would serve Queen Elizabeth I so well.

Finally, and this is crucial to Katherine’s story, Queen’s Gambit is woman’s book from beginning to end, not in any pejorative way but in the very best sense of a feminist perspective. Filled with intimate details about women’s dresses and the rich food and even the odors of Tudor England, the novel also ponders how little control these women had over their lives. Henry VIII always got his own way, always. When, for a brief time, Katherine served as Regent, she battled constantly against the misogynist prejudices of his privy counselors. Watching her outwit them is part of Queen’s Gambit’s charm. Watching her ongoing relationship with Thomas Seymour is telling, too. How so? You’ll have to read this superb historical novel to learn the answer. Fact or fiction? You’ll have to guess!   – Ann Ronald

Also available by Elizabeth Fremantle: Sisters of Treason; Watch the Lady; The Girl in the Glass Tower (06/2016). 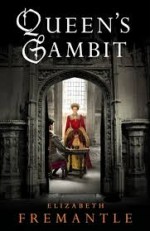 Ann Ronald is a retired English professor from the University of Nevada, Reno. Author of dozens of reviews, she’s also written a number of books about the American West. They include literary studies such as The New West of Edward Abby and Reader of the Purple Sage, cultural studies such as GhostWest and Oh, Give Me a Home, and nature writing such as Earthtones: A Nevada Album. Her latest is a work of fiction, Friendly Fallout 1953. Since retiring, she’s been reading vociferously, so “Bookin’ With Sunny” is giving her a wonderful opportunity to share thoughts about her favorite new discoveries.
More from this reviewer
PrevTahoe Blue Fire
The Fly TrapNext