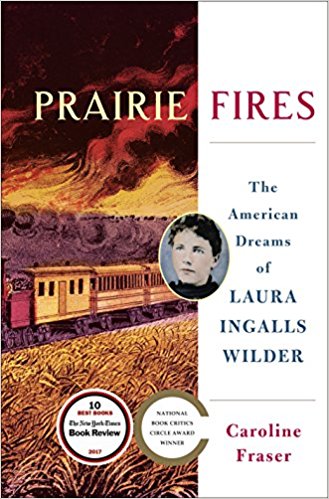 When I saw a publication notice for Fraser’s Prairie Fires, I was immediately intrigued. Put simply, I have never read anything written by Laura Wilder, and I wondered why? After all, she has been a favorite children’s writer for the past eighty years. After reading this lucid and strikingly researched biography by Caroline Fraser, I now know why Wilder escaped my youthful reading obsession. But before the personal note, I’d like to discuss Fraser’s book.

There are three main subjects in this book: Laura, her daughter Rose, and disentangling the historical Laura from the fictionalized one created in her books. By any reckoning, the historical life led by Laura Ingalls Wilder from 1867 to 1957 had abundant adventure and challenge, particularly in her first thirty years. During these three decades, she lived through and bore witness to frontier life with its persistent agricultural recessions, depressions, diseases and attendant poverty. In 1894, She and her husband, Almanzo (Manly) left her family’s town of De Smet, South Dakota in favor of pursuing another chance in Mansfield, Missouri, a small, struggling town embedded in the Ozarks. Until she was in her sixties, Laura and Manly lived their lives near the abyss of economic disaster.

If there is a theme in the first half century of Wilder’s life, it is that there was no Eden to be found in her America. Small farms on the American Prairie offered grueling and frequently overwhelming challenges to their owners. Laura’s and Manly’s relocation to the Ozark hill country was a tacit admission that they couldn’t be self-sufficient, much less economically successful, on free (Homestead Act) land located in the semi-arid plains. In Mansfield, they secured a mortgage on forty acres of land, acreage that demanded they adopt a multi-pronged approach to economic survival instead of relying on one crop as they did on the plains. Even so, they were reduced to selling firewood for $.50 a wagon load in the early years while they expanded slowly into poultry, apples, goats, and vegetables. They lived in town, a few hundred yards from their farm, in a rented house that Manly’s parents purchased for them around 1900. This gift proved to be the first step towards their economic stability although yearly transfusions of money from their daughter Rose were necessary during the fifteen years stretching from the end of World War I to the depths of the Great Depression. Laura and Manly escaped poverty only with the success of the Little House on the Prairie series published from 1932 to 1943.

In Caroline Fraser’s view, it was in part Laura’s reaction to a lifetime of poverty, duress, and shame that fueled her authorial attitudes, the ones that became famous in the Little House on the Prairies series: hard work, self-reliance, humor, cheerfulness, love, and kindness. While her attitudes were no doubt real ones, the books were historical fiction, with an emphasis on fiction according to Fraser. The novels were loosely based on her life although she and her daughter, who served as her editor and sometimes-cheer-leader, maintained in public that they were entirely factual and true. In the end, Wilder may have come to believe her self-made myth. In any case, her countless fans—young and old—wanted to believe the historical truth of her tales. I might cynically add that her self-interest encouraged a bit of dissembling.

So, why didn’t I read any of her books as a boy? The simple answer is that as I read Fraser’s Prairie Fires, I recovered a memory of mine from when I was about nine or ten: these books were written for girls. So, not for me! A more complicated answer has to do with my childhood proximity to rural life in Kansas. I found it alien and intimidating. I didn’t want to read about it. Fraser’s book, however, is a delightful biography.   – Neal Ferguson 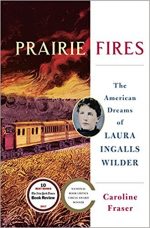 Neal Ferguson is a self described Anglo-phile. After studying for a PhD in British history and doing research for a year in various British archives, he came to the University of Nevada in 1970 to teach. Soon he found himself in administration where he remained until 2003. After returning to full-time teaching a decade ago, he decided to concentrate his teaching energies on Medieval British history and various global aspects of World War II. Dedicated to Ambrose Bierce’s proclamation that the purpose of war is to teach Americans geography, Neal insists that his students accompany him (in class) to sundry east European rivers and steppes, African deserts and jungles, south-east Asian mountain ranges and peninsulas, and small islands and coral reefs in the Pacific. Currently he is writing a book about the ups and downs of General Douglas MacArthur’s military reputation.
More from this reviewer
PrevThe Chilbury Ladies’ Choir
The Woman in the WindowNext