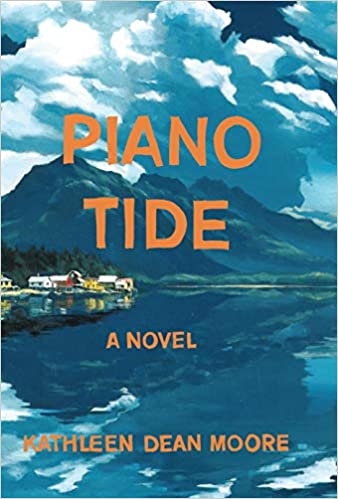 Environmental ethics in a small southwest Alaskan community down on its luck? Piano Tides — Kathleen Dean Moore’s cast of misfit residents, all strong-willed characters who often surprised their creator decide the direction they should take on behalf of their beloved Good River Harbor.

Kathleen Dean Moore, a philosophy professor by trade and a philosophical ethicist by inclination, has turned her talents toward fiction. At the close of Piano Tide, she acknowledges that, while writing her novel, her characters got away from her. “I had originally invented each one to embody a different theory of environmental ethics,” she explains. “But they soon told me that they had minds of their own, and free will. They would do and think what they damned well pleased.” Right there, Moore pinpoints the extraordinary power of her writing. She populates Good River Harbor, a small southwest Alaskan community down on its luck, with a collection of misfit residents. I fell in love with each and every one, just as I continued to muse about their motives and their moods.

Piano Tide begins by adding a new arrival to the mix of old-timers, Nora, accompanied by her dog Chum and an upright piano. As the novel progresses, the reader gradually learns about Nora’s past, why she has relocated herself in such a remote locale and why she brought a piano along for the journey. She intrigues the long-time Good River Harbor residents—Lillian, who operates the local “Bath ‘n Bar;” the good-natured Tick plus his wife and sons; Kenny, a wheel-chair-bound curmudgeon; and Axel, CEO of Good River Products, Inc. and a man who has big plans for the future. If Axel has his way, their tiny outpost, once home to a now-defunct canning factory and surrounded by massive clear-cuts, will thrive anew. His wife, his daughter, and the other townspeople are not so sure they like his vision. Ignoring their wishes, Axel hires Howard as his public relations man, they write some successful grants, and it seems like Good River Harbor will again thrive. But at what cost?

That is the key question of Piano Tide—if and when progress comes, at what cost? Kenny compares their lots in life to Sisyphus, cursed by Zeus to eternally push his rock. That’s what entrepreneurs like Axel do in a boom and bust economy, and that’s what everyone who stands in the way of such plans do, too. Moore never labels the recalcitrant Good River Harbor residents as “environmentalists,” but their instincts are to protect the habitat as they seek to salvage their unique way of life. They aren’t monkey-wrenchers, exactly. Yet they do invent diversions that have monkey-wrench repercussions.

The details of those diversions are not important, however, because Moore’s goal is not to write an eco-thriller but instead to create a set of hypothetical situations that will lead her readers to think beyond the boundaries of her characters’ reflections. Piano Tide is a novel whose innate ideas and subtle questions will linger in its readers’ imaginations for a long, long time. The rich Alaskan landscape will resonate as well. Moore writes vividly. Attuned to all five senses, her descriptions made me feel like I was standing on a derelict beach, reaching into the muck, pulling up geoducks, kicking at the kelp. Or I would be on Tick’s boat, hauling in crab or a shrimp pot, hoisting a heavy halibut line. Or maybe I would be listening to Nora finger her piano keys, the Kis’utch river muffling the sound. On every page, such tactile descriptions and the unexpected antics of eccentric characters who “do and think what they damned well pleased” bring Moore’s philosophical inclinations to life. For sure, Piano Tide is no esoteric abstraction. Rather, it’s a flesh and blood book populated with honest people and some truly profound thinking. –  Ann Ronald 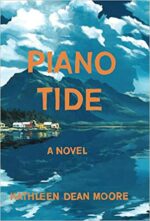 Ann Ronald is a retired English professor from the University of Nevada, Reno. Author of dozens of reviews, she’s also written a number of books about the American West. They include literary studies such as The New West of Edward Abby and Reader of the Purple Sage, cultural studies such as GhostWest and Oh, Give Me a Home, and nature writing such as Earthtones: A Nevada Album. Her latest is a work of fiction, Friendly Fallout 1953. Since retiring, she’s been reading vociferously, so “Bookin’ With Sunny” is giving her a wonderful opportunity to share thoughts about her favorite new discoveries.
More from this reviewer
PrevThe Red Address Book
Circle WayNext