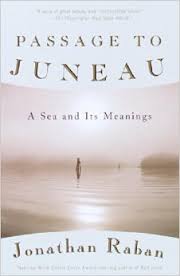 Passage to Juneau: A Sea and Its Meanings

Raban’s Passage to Juneau doesn’t fit easily into a genre category. True, this is an absorbing, stylistic travel memoir in which he recounts his experiences while sailing a thirty-five foot ketch from Seattle to Juneau and back, about 2,000 miles. His experiences, however, include the history of an English sea captain, George Vancouver, who from 1791-95 anticipated many geographical segments of Raban’s own sailings and left his choice of names on dozens of geographical features including, of course, Vancouver Island. Raban gives arresting attention to storms, winds, isobars, tides, waves, fogs, currents, and sea life—many of the things that make the sea mysterious, exhilarating, and dangerous. Raban’s curiosity extends to the people, particularly the tribes, who have settled the islands, inlets, and rivers for hundreds of years along what was the world’s greatest wild salmon fishery. And there’s more, all of it fascinating and lucidly described.

His love for the sea is revealed in the book’s initial pages providing a rhythmic cadence to it from beginning to end. He came to the sea as a mid-life convert. Like many a convert he baptized himself in the sea by immersion into the minutia of sailing: boats, sails, lingo, tides, navigation, and literature. Raban explains in detail why the early chronometers did not really solve the problem of determining longitude despite what Dava Sobel wrote in Longitude (an equally fascinating, absorbing book).  Nearly every nautical mile of his adventure is informed by literature, whether it be 18th century journals, compendia of sailing lore about the “Inside Passage,“ navigational aids, ecological books by Barry Lopez and others, the anthropological works of Franz Boas, or some Dr. Seuss.  He stores these books and many more in his on-board library and has an ongoing conversation with them during his journey to Juneau.

I found his conversations with anthropologists and folklorists to be delightful and edifying. Eventually he comes to question the long-held belief that the Indian tribes of the Pacific Northwest had an ample food supply based on predictable, bountiful salmon stocks, that is, until Europeans showed up to spoil the idyl.  How Raban comes to doubt this article of faith is testimony to his observational skills and ability to synthesize information and points of view from all around the compass.  He carries his varied, ample knowledge with ease and applies it with a light touch.

Raban’s sailing trip to Juneau gives his book a physical thread that binds his story together, but the last two words of his book’s subtitle—Its Meanings—reveal even stronger binding stuff. The “meanings” Raban assigns to his travels are intellectual, philosophical, and emotional.  All are deeply personal.

Beyond his love for sailing and the sea, what urges him to set sail northwards from Seattle?  Why Juneau? His motivation is a bit mysterious, and I’m not going to give you the pieces that provide the solution. Suffice to say that Raban’s journey is also an internal exploration. It’s also an examination of his relationships with his father, wife, and daughter.  Passage to Juneau is a beautifully written and constructed example of the old saw that travel is about the journey not the destination.

This is the first book I’ve read by Jonathan Raban.  I’ll let you know what I think of the second, and the third, and . . . . Thanks to my friend of forty years, Ron Carducci, for pointing me towards Jonathan Raban’s works.  – Neal Ferguson 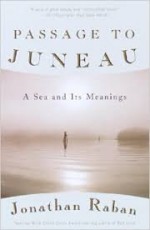 Neal Ferguson is a self described Anglo-phile. After studying for a PhD in British history and doing research for a year in various British archives, he came to the University of Nevada in 1970 to teach. Soon he found himself in administration where he remained until 2003. After returning to full-time teaching a decade ago, he decided to concentrate his teaching energies on Medieval British history and various global aspects of World War II. Dedicated to Ambrose Bierce’s proclamation that the purpose of war is to teach Americans geography, Neal insists that his students accompany him (in class) to sundry east European rivers and steppes, African deserts and jungles, south-east Asian mountain ranges and peninsulas, and small islands and coral reefs in the Pacific. Currently he is writing a book about the ups and downs of General Douglas MacArthur’s military reputation.
More from this reviewer
PrevThe Paying Guests
My PantryNext