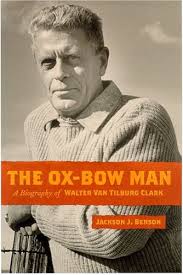 The Ox-Bow Man, A Biography of Walter Van Tilburg Clark

The Ox-Bow Man is the biography of Walter Van Tilburg Clark, a man who loved Nevada and the west so much that it stunted his writing career. His signature work, The Ox-Bow Incident is a classic western or anti-western about lynch mob justice. I say anti-western because it was the author’s intent not to add to the cozy mythology that had grown around the west. In Clark’s west, honor and bravery are scorned, and there are no heroes.

The Ox-Bow Incident was made into a well-regarded movie in 1943, starring Henry Fonda and Dana Andrews. As literature, Clark was never able to top his most famous creation. The reasons are complex. Walter Van Tilburg Clark was born in New York City in 1909. His family came west when his father, also named Walter, became president of the University of Nevada, Reno. From that moment, the younger Clark, barely out of his teens, became a man of the west.

Clark later became a teacher of creative writing and a very good one. His former students, quoted in The Ox-Bow Man, paint a glowing portrait of a man truly dedicated to teaching. Unfortunately, his teaching assignments all too often placed him east of the Rockies. He tried to get permanent teaching jobs in Nevada so he could reside in his beloved Virginia City, but could only secure temporary assignments. As a consequence, V.T. Clark was often separated from his family and always homesick.

V.T. Clark was an exact contemporary of Wisconsin writer August Derleth. Derleth wrote prolifically in all genres but achieved his greatest literary success as a Wisconsin regionalist. Clark could have done the same for Nevada. Instead his success as a teacher combined with his homesickness prevented that.

His big success, The Ox-Bow Incident, came in 1937 when the author was only twenty-eight. Clark’s follow-up to Ox-Bow was Track of the Cat, which became a modestly successful film starring Robert Mitchum. Then, from 1950 or so, until his death in 1971, V.T. Clark suffered almost total writers’ block. His interest in athletics and a decade-long task editing the journals of Nevada historical character Alfred Doten were further distractions from writing fiction.

The Ox-Bow Man is an attractive package, typical of the publications of UNR Press. Many family photographs are included and in these photos,V.T. Clark appears to have been a powerfully built man who loved his family, even though his teaching caused lengthy separations. He seems to have loved life, and any anxiety about his writers’ block doesn’t show on his face. “As far as life choices, Clark consistently chose teaching over writing and never claimed to be less than happy with his decision.” Even though V.T. Clark could hardly be considered a major literary figure, his best-known work has forever changed the public perception of historical frontier justice.  – Daniel Erwine

Also available by Jackson Benson: Down by the Lemonade Springs, Essays on Wallace Stegner; Looking for Steinbeck’s Ghost; John Steinbeck and Farm Labor Unionization; Hemingway, The Writer’s Art of Self-Defense; Under the Big Sky, A Biography of A. B Guthrie, Jr. 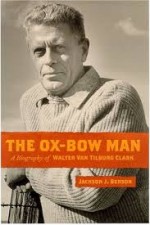 Sunny Solomon holds an MA in English/Creative Writing, San Francisco State University. She is a book reviewer for “The Clayton Pioneer” and her poetry and other writing has been published in literary journals, one chapbook, In the Company of Hope and the collection, Six Poets Sixty-six Poems. She was the happy manager of Bonanza Books, Clayton, CA and Clayton Books, Clayton, CA. She continues to moderate a thriving book club that survived the closure of the store from which it began. Sunny currently lives next to the Truckee in Reno, NV.
More from this reviewer
PrevRedeployment
The Rural Lives of Nice GirlsNext