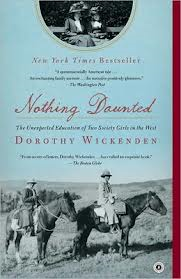 Dorothy Wickenden, the author of Nothing Daunted: The Unexpected Education of Two Society Girls in the West, describes the story of her grandmother’s year in Colorado as “an alternative Western.” I completely agree. But in truth, Nothing Daunted is much more than that. The book is an historical overview of a wide slice of American culture in the latter part of the nineteenth and the beginning of the twentieth century. Even as she focuses on her grandmother, Dorothy, and her best friend, Rosamond, Wickenden also contextualizes their lives.

She begins with Dorothy and Ros’s upbringing in upstate New York. From well-connected and well-to-do families, their parents’ friends read like a Who’s Who list of American notables. The girls go on to college, graduating from Smith in 1909. Next come several years of idle occupation—teas and salons, a grand European tour, dinner dances and country club luncheons. Their families hope the girls are seeking suitable husbands, but actually the young women are totally bored. When they hear about two jobs for teachers in rural northwestern Colorado, they leap at the chance to do something different. Despite their family’s misgivings, Dorothy and Ros head west.

During the year they spent in Elkhead, Colorado, they both wrote regularly to their parents, their siblings, and their friends. Later, they both recorded oral histories about their experiences. Many of the men and women they met that year also were voluminous correspondents, and their families saved all those letters. Wickenden puts the pieces together, along with newspaper clippings and historic anecdotes of the times, to create not only an “alternative Western,” as Wickenden suggests, but also a lively look at the American entrepreneurial can-do spirit.

Along with the two intrepid adventurers, the reader gets to know a number of eligible suitors—the Harvard lawyer turned cowboy, the son of the coal magnate, the up-and-coming banker, the earnest homesteader, the effete easterner. The girls room and board with the Harrisons, who are barely eking out a living in the Colorado high country and who are delightfully down-to-earth twentieth-century pioneers. Their students (Dorothy teaches a rowdy roomful of grade school boys, while Ros teaches all the upper grades to a group of older students) are another charming set of characters. Neither teacher has any teaching experience whatsoever, but apparently they were highly successful. The after notes explain how many of their students went on to college and even graduate school, encouraged in a single year by their enthusiastic mentors.

Dorothy and Ros had many adventures, too. The winter of 1916-17 was one of Colorado’s worst, and they had to ride 2 ½ miles each way, every day, to and from the one room schoolhouse. Meanwhile, the men in their lives took them sleigh riding, dancing, down in a mine, cross-country skiing, and scenery gazing everywhere. I won’t ruin the story by telling you who pairs up with whom, but you learn at the outset that Dorothy and Ros only lasted a year in Elkhead before becoming wives.

So Wickenden takes perhaps a hundred letters, from the European tour and from the Colorado enterprise, recalls her own conversations with her grandmother and with so many of her grandmother’s friends and their descendants, and spins all this into a lively exploration of early twentieth-century America. Those were enthusiastic times with optimistic men and women participating in what they all saw as a great adventure. Nothing Daunted is just that; nothing discouraged Dorothy and Ros, nothing dismayed them, nothing stopped them from having the time of their lives.     – Ann Ronald 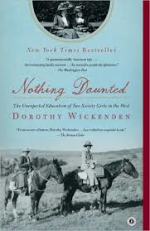 Ann Ronald is a retired English professor from the University of Nevada, Reno. Author of dozens of reviews, she’s also written a number of books about the American West. They include literary studies such as The New West of Edward Abby and Reader of the Purple Sage, cultural studies such as GhostWest and Oh, Give Me a Home, and nature writing such as Earthtones: A Nevada Album. Her latest is a work of fiction, Friendly Fallout 1953. Since retiring, she’s been reading vociferously, so “Bookin’ With Sunny” is giving her a wonderful opportunity to share thoughts about her favorite new discoveries.
More from this reviewer
PrevTrue Believers
Sun Going DownNext