Home » Reviews » Not All Bastards Are From Vienna

Not All Bastards Are From Vienna

Not All Bastards Are From Vienna

Because the hundredth anniversary of World War I occurs this decade, a plethora of war novels is being published right now. A very fine one is Andrea Molesini’s 2010 Italian novel, Not All Bastards Are From Vienna, which has just been translated into English by Antony Shugaar and Patrick Creagh. Both evocative and provocative, it offers an in-depth look at what Italians experienced while their country was occupied by the Austrians and while the fighting was taking place in their own backyards.

Not All Bastards Are From Vienna fictionalizes a little-known account by Maria Spada titled Diario dell’invasione. Set in a small community north of Venice, it features an oddly eccentric aristocratic family forced to house the enemy. Paolo, seventeen years old, lives there with his grandparents, his aunt, and an assortment of family retainers. Molesini uses Paolo as the novel’s narrator, inviting him to recount the troubles, the triumphs, and the tragedies through the eyes of a boy rapidly becoming a man.

Molesini’s novel begins when the Germans commandeer the Spada estate, take over the grounds, ransack the villa, and make themselves at home. The Spadas, relegated to the second floor and the attic, appear cooperative. But, as Paolo soon learns, the truth is otherwise.  The steward, recently employed to run the Spada holdings, is actually a high-ranking member of the resistance, something Paolo’s family knew when they hired him. Before long, they are signaling troop movements by carefully draping laundry outside and by opening and closing certain windows and shutters and shades. They are rescuing downed airmen, too, at great risk to themselves.

Renato, the steward, soon recruits Paolo. As a young man pretending to be in love, Paolo can wander freely throughout the neighborhood. Molesini does a particularly astute job of depicting Paulo’s maturation process, changing him from a naïve adolescent into someone capable of violence and intrigue. Of course when Paolo grows more deeply embedded in the resistance cause, his story turns more brutal. But there is levity, too, as the Spada family tries to cope with the horrendous situation in which they find themselves. Molesini is to be commended, in fact, for balancing these two competing strands, the madness of war and how the participants use humor to cope.

Molesini is also to be commended for his literary finesse. I know it is foolish to talk about the style of a novel I’ve only read in translation, but what I admired most in Not All Bastards Are From Vienna must surely be a part of the original. And that is Molesini’s reliance on sensory perceptions.  Time and again Molesini stresses the smells of war, the latrines dug too close to the house, the way characters’ clothes turn musty, the aromas of stews made from ostensibly foul ingredients, the scent of blood. Other senses occur frequently, too, some tactile and others visual. Colors, rays of light and confining darkness, rain and mud and winter cold, all these permeate the landscape of Not All Bastards Are From Vienna, making its torments feel all too real.

Molesini’s novel is not a happy book to read, but neither is it oppressive. Rather, I would characterize it as a realistic fictionalization of a family caught in a war not of their making. How would any one of us handle a spate of foreign soldiers camped out in our house, eating our food and drinking our wine?  Read Not All Bastards Are From Vienna to discover multiple modes of their survival.   – Ann Ronald 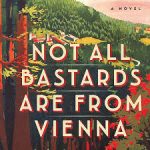 Ann Ronald is a retired English professor from the University of Nevada, Reno. Author of dozens of reviews, she’s also written a number of books about the American West. They include literary studies such as The New West of Edward Abby and Reader of the Purple Sage, cultural studies such as GhostWest and Oh, Give Me a Home, and nature writing such as Earthtones: A Nevada Album. Her latest is a work of fiction, Friendly Fallout 1953. Since retiring, she’s been reading vociferously, so “Bookin’ With Sunny” is giving her a wonderful opportunity to share thoughts about her favorite new discoveries.
More from this reviewer
PrevRelativity
Magic HourNext