Home » Reviews » If I Never Get Back

If I Never Get Back 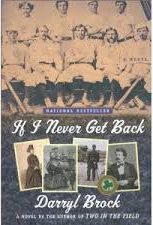 If I Never Get Back

How perfect for this baseball-deficient reviewer to have finished Darryl Brock’s absolutely smashing novel, If I Never Get Back, before baseball’s 2016 opening day, April 3rd. I’m ahead of the game on one level, behind on another in that this novel was new in its 2003 Plume edition.

Though I’m a fan of neither baseball nor time-travel, I loved Brock’s novel, which is all about both. It’s also a fabulous historical novel, a romance, and a shoot ‘em up western. One last draw for us West Coast folk: the story begins and ends (a possibility, but I’m not telling) in the Bay Area.

The novel opens as present-day protagonist Sam Fowler, slowly self-destructing between his divorce, limited weekend-only visits with his young daughters, drinking and increasingly sloppy journalism, is told of his estranged father’s death. He flies to Cleveland to both identify and dispose of his father’s remains.

Sam decides to return to California by Amtrak, taking time to think about his failed relationships and to see the country. When the train stops for a tie-up in Toledo, he steps off to stretch his legs and slake his hangover. While still waiting, he experiences a feeling he describes as “milkiness,” accompanied by remembered, remorseful conversations with his young daughters, a weird visitation of red-winged black birds and blurred vision. “Then, for a distinct instant, emerging from the white light, I saw a human figure. . . In the background, on a hill across a stream or narrow river, a group of people stood in hazy tableau, looking at me.” When Fowler fully regains his faculties he finds himself alone at a deserted station and the Amtrak gone. The reader is keenly aware that, like Dorothy, he’s “not in Kansas anymore.”

When Sam climbs aboard the wooden coach of a steam engine heading back to Cleveland, we willingly climb aboard with him. The year is 1869 and his fellow passengers are the Cincinnati Red Stockings, America’s first professional baseball team.

What follows is a series of stories within the main story: the fascinating history of baseball, its rules, its equipment, hucksters, fans and players; a clairvoyant for whom Sam’s appearance is not a surprise; a lovesick Samuel Clemens; a band of Irish American patriots bent on freeing Ireland from its tyrannical yoke; and the spirit of a young Irish American slain in the Civil War at Antietam. Along the way, Sam becomes a substitute player for the Cincinnati team, a sports journalist, and game marketer extraordinaire, bonding with the team (and with Cait, the sister of his favorite teammate) as they travel on a national tour, winning game after game.

By the time, Sam has found love with Cait, a cache of ill-gotten thousands, and a price on his head for the ill-gotten gains, the unbeaten Cincinnati Stockings book passage on the newly completed Continental Railroad and head to the West Coast for more ball games. The ensuing westbound action leaves the reader with few moments to consider which San Francisco Sam will return to, or what he will do in either case. If you long to hear the words “Play ball!” or “All aboard!”  If I Never Get Back will not disappoint.   – Sunny Solomon 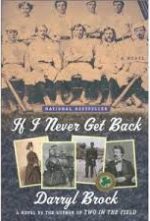 Sunny Solomon holds an MA in English/Creative Writing, San Francisco State University. She is a book reviewer for “The Clayton Pioneer” and her poetry and other writing has been published in literary journals, one chapbook, In the Company of Hope and the collection, Six Poets Sixty-six Poems. She was the happy manager of Bonanza Books, Clayton, CA and Clayton Books, Clayton, CA. She continues to moderate a thriving book club that survived the closure of the store from which it began. Sunny currently lives next to the Truckee in Reno, NV.
More from this reviewer
PrevNein, A Manifesto
The Paying GuestsNext