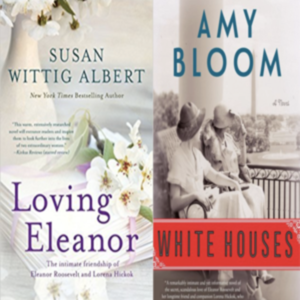 Blanche Wiesen Cook’s three-volume definitive biography of Eleanor Roosevelt inspired both Susan Wittig Albert and Amy Bloom to write novels focusing on Eleanor’s intense relationship with Lorena Hickok (always known as Hick). After Eleanor’s death in 1962 and Hick’s in 1968, hundreds of letters between the two women, stored at the Franklin D. Roosevelt Presidential Library in Hyde Park, were unsealed. This correspondence allowed Cook to thoroughly explore Eleanor and Hick’s true feelings for each other, which in turn motivated Albert to write Loving Eleanor and Bloom to create White Houses. Both novels fictionalize what Cook found to be true, but both novels delve more imaginatively into the physical passion and the emotional connections the two women shared.

Theirs was an unlikely friendship. Hick, born in South Dakota and coming of age amidst miserable circumstances, was a respected Associated Press reporter who had made her reputation while investigating the Lindbergh kidnapping. Aristocratic Eleanor Roosevelt, in contrast, was born to wealth and privilege and a life of ease. When Hick was assigned to cover the then New York Governor Franklin D. Roosevelt and his wife, Eleanor, she assumed the stint would be short-lived. Instead, she fell deeply in love, as did the soon-to-be president’s wife. The extant letters they exchanged make the nature of their Lesbianism totally clear. The two women adored each other: physically, mentally, emotionally.

Loving Eleanor and White Houses both interrogate the relationship by imagining Hick’s point of view and by holding Eleanor’s feelings at arm’s length. Both stories open long after the physical intensity has diminished, though the emotional bonds always remained strong. Loving Eleanor begins on the day of Eleanor’s funeral, which Hick did not attend, and then reconstructs the preceding years of love and attachment. White Houses opens the day of FDR’s funeral, which Hick did not attend, and then reconstructs not only Hick’s feelings for Eleanor but also some of the circumstances of Hick’s upbringing and coming of age. For the two days following FDR’s funeral, Bloom situates Eleanor and Hick together. Thus, the White Houses’s memories take place in Hick’s imagination while she is sharing time and space with the newly-widowed Eleanor. Albert chooses a different tack, isolating Hick with the extensive correspondence and setting Hick’s feelings adrift.

Both tactics work. As I think back on the two approaches, it seems that Loving Eleanor ought to be the more passionate of the two novels because Hick’s mind is so very free. In retrospect, however, I think White Houses is the more intense, perhaps because Bloom reveals more of the interior Hick, imagines more moments in her childhood and teenage years, and examines the ethical underpinnings that must have led Hick to make certain choices. Albert probes just as intensely into Hick’s inner feelings but cloaks them more in the political machinations of the Roosevelt generation. Bloom, less political, is more introspective. The endnotes echo the substance. Albert includes a bibliography and an extensive discussion of her research whereas Bloom acknowledges her sources in two truncated pages. Both writers clearly delineate the deviations between fact and fiction in their respective works, but Albert is more scholarly, Bloom more abstract.

It is easy to recommend both novels. Each opens a closed door on the lives of well-known figures in American political history, and does so with finesse and good taste. Loving Eleanor and White Houses are alike in many ways. I was intrigued by two different imaginative interpretations of indisputable facts, but both books echo one another in their reconstructions of Hick’s personality. Through Susan Wittig and Amy Bloom’s eyes, Hick’s love for Eleanor remains central to the reporter’s being for her entire adult life.   – Ann Ronald

More books available by Amy Bloom: Lucky Us; A Blind Man Can See How Much I Love You; Where the God of Love Hangs Out; Love Invents Us; Away; Come to Me; Normal; Little Sweet Potato; Rowing to Eden, Collected Stories; Between Here and Here (short stories); There

More books available by Susan Wittig Albert: A Wilder Rose; The Last Chance Olive Ranch; Thyme of Death; The General’s Women; Hangman’s Root; Widow’s Tears; Cat’s Claw; Chile Death; Witches’ Bane; Death Come Quickly; Lavender Lies; The Darling Dahlias series: and the Cucumber Tree; and the Confederate Rose; and The Unlucky Clover; and The Tale of Hawthorn House;and Mistletoe Man; and The Tale of Cuckoo Brow Wood; and the Eleven O’Clock Lady; and Together Alone; and The Texas Star; and the Naked Ladies; and the Silver Dollar Bush. Rosemary Remembered; Love Lies Bleeding; Mourning Gloria; The Tale of the Castle Cottage; Rueful Death; The Tale of Hill Top Farm; Wormwood; Indigo Dying; Holly Blues; Nightshade; A Dilly of a Death; Spanish Dagger; The Tale of Holly How; Dead Man’s Bones; The Tale of Applebeck Orchard; The Tale of Oat Cake Crag; Bleeding Hearts; The Tale of Briar Bank;, A Memoir of Marriage and Place; Death on the Lizard; Bloodroot; China Bayles’ Book of Days: 365 Celebrations of the Mystery, Myth, and Magic of Herbs from the World of Pecan Springs; An Unthymely Death;Writing From Life; Death at Bishop’s Keep; Blood Orange’; Death at Whitechapel. 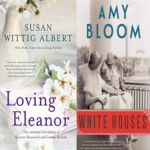 Ann Ronald is a retired English professor from the University of Nevada, Reno. Author of dozens of reviews, she’s also written a number of books about the American West. They include literary studies such as The New West of Edward Abby and Reader of the Purple Sage, cultural studies such as GhostWest and Oh, Give Me a Home, and nature writing such as Earthtones: A Nevada Album. Her latest is a work of fiction, Friendly Fallout 1953. Since retiring, she’s been reading vociferously, so “Bookin’ With Sunny” is giving her a wonderful opportunity to share thoughts about her favorite new discoveries.
More from this reviewer
PrevOn Love, A Novel
The Girls in the PictureNext