Kurt Vonnegut The Last Interview and Other Conversations 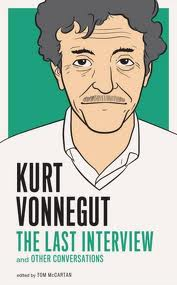 Like most of Vonnegut’s novels and nonfiction, Kurt Vonnegut, The Last Interview and Other Conversations is also short on pages, but never on depth of content. By the time I’d finished reading it, there were post-its on almost half of its 188 pages. Even with the book on my “to review” stack, Vonnegut’s thoughts and words have followed me throughout the day.

For those of us who read Vonnegut in our youth, these interviews remind us why. In our day, he was that iconoclastic writer to be wildly embraced or vehemently shunned. Today, when his books haven’t been removed by worried boards of education, titles such as  Slaughterhouse Five are often required reading in high school English classes.

The six interviews included in this collection range from the years 1977 to 2007, and include topics as varied as writing, family, war, friendship, Indiana, philosophy, art, libraries and librarians, and “the bomb.” Vonnegut died in July 2007, one month after his last interview.

Unlike so many of today’s authors of popular fiction, Vonnegut did not major in English or Creative Writing. He studied chemistry and anthropology at both Cornell and U. of Chicago. “I was thirty-five before I went crazy about Blake, forty before I read Madame Bovary, forty-five before I’d even heard of Céline. Through dumb luck, I read Look Homeward Angel exactly when I was supposed to.” What is not to like about a writer who believed his critics felt he was “barbarous” and that he “was no gentleman, since I had done hack writing so cheerfully . . .” and “had not paid my academic dues?”

Born and raised in Indianapolis, Indiana, his was a happy childhood with vibrant parents and siblings and a rather large extended family. As a kid, Vonnegut got his family’s attention at the dinner table by being funny, making jokes. “And that’s what my books are now that I’m a grownup—mosaics of jokes.” His humor and satire make his comparison to Mark Twain an easy one.

In a 1992 interview, he was asked about the corporate influence into publishing. He answered that he didn’t think it “will be beneficial toward literature.” Reading that answer today makes you wonder how he would feel about publishing now. Vonnegut came from a long line of “free thinkers,” or humanists, as we would call them today. His admitted atheism in no way diminished his innate sense of morality. For those who read Vonnegut carefully, it would not surprise them to know he was “enormously influenced by the Sermon on the Mount.” Tom McCartan’s choice of interviews is so on target. I’ve already pulled five or six Vonnegut books off my shelves for rereading.

Pick up a copy of Kurt Vonnegut the Last Interview and find out why this man will be in print (electronic or otherwise) for a very long time. And when you next run into a teen who’s been assigned a Vonnegut title and asks who the heck Kurt Vonnegut is, just hand her McCartan’s collection of interviews.            – Sunny Solomon 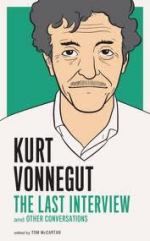 Sunny Solomon holds an MA in English/Creative Writing, San Francisco State University. She is a book reviewer for “The Clayton Pioneer” and her poetry and other writing has been published in literary journals, one chapbook, In the Company of Hope and the collection, Six Poets Sixty-six Poems. She was the happy manager of Bonanza Books, Clayton, CA and Clayton Books, Clayton, CA. She continues to moderate a thriving book club that survived the closure of the store from which it began. Sunny currently lives next to the Truckee in Reno, NV.
More from this reviewer
PrevIf There is Something to Desire
The Sweetest FigNext