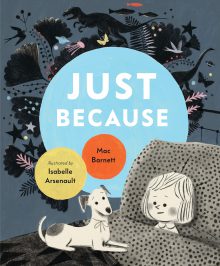 How many of us who have children in our lives remember people telling us, “Enjoy them while you can because they grow up so quickly”? We know what happens to children as they outgrow clothing, games, and hobbies. What about the picture books first read to them and then read by them as they grow? Some we box and save for grandchildren, others we donate to library sales, and still others, I’d suggest we save for ourselves. And why, you might ask? Well, just because.

I’ve passed along a lot of picture books to my grandkids, especially books signed to them by the author. But there are others I’ve claimed for myself. I will read them to any child willing to sit in my lap, but certain books will not leave Nana’s shelves until Nana goes to that great library in the sky. In the meantime, as I approach a more mature maturity, I’m guessing that I will not always want to read lengthy novels. For me, those picture books with singular content married to phenomenal illustrations are keepers.

Candlewick Press recently sent me for review, Just Because, written by Mac Barnett and illustrated by Isabelle Arsenault. I will take it with me to Oakland for a family Thanksgiving, where I can read it to my youngest grandkids, but Just Because will return with me to Reno. If they love it as much as I do, I will buy them their own copy. 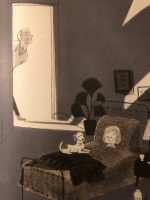 Just Because is the story of a father attempting to say goodnight to his daughter. In the first illustration, we see a dad at his daughter’s bedroom door. He has one foot in the doorway, and his daughter is tucked into bed. I’m guessing that he has already said goodnight, but just as he leaves, she asks, “Why is the ocean blue?” Instead of saying, “Just because,” this dad stops, and from the look on his face, we know he is thinking of an answer.

The next two pages are filled with wonderfully drawn sea creatures and the father’s answer:

Every night, when you go to sleep,
the fish take out guitars.
They sing sad songs and cry blue tears.

The child is not ready for sleep or for dad to leave. She asks another question: “What is the rain?”  Now, dad stands inside the bedroom, arms crossed, chin down, obviously thinking hard about the answer to this question. This answer is just as fantastical as the first, and is followed by yet a third question, “Why do the leaves change color?” Dad has now stepped back into the doorway and is leaning against the door frame, pondering another answer. Dad’s answers become increasingly more complicated and nonsensical:

In autumn, when the world gets colder,
the trees keep warm by setting quiet little fires in their leaves.
By winter, their branches have all burned up. 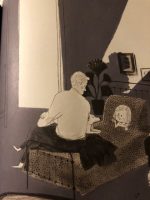 Now, Dad steps into the bedroom and with hands on hips, looks down at his daughter who is already thinking of the next question to prolong the “goodnight.” We can tell by the smile on his face that Dad has figured out what his daughter is up to. Her fourth question is: “Why do birds fly south for the winter?”  With this question answered, Dad sits down at the end of his daughter’s bed, legs crossed with only socks on his feet (maybe Dad is ready to call it a day), arms still folded and looks down at his daughter, with a patient smile, and waits for the next question, which is about the disappearance of dinosaurs. Dad’s answer is pure whimsy:

Millions of years ago, thousands of asteroids fell on the earth.
But the dinosaurs had planned for this.
They fastened themselves to big balloons,
floated into space, and stayed there.

The next question is a scary one, but that doesn’t stop the little girl from asking at least a dozen more questions, which the author does not tell us the father’s answers. It is enough to know that the little girl is not ready for lights out. But the father finally gets up from the bed and touches his daughter’s head, telling her, “It is time to go to sleep.” And now, with her eyes finally closed, his daughter asks: “Why do we have to sleep?” Dad is already half-way through the door and without turning back, answers: “Because there are some things we can only see with our eyes closed.”

I have now read Just Because at least six or seven times, and with each reading, I discover something new, something not noticed before. It took a few times before I saw that Dad was not wearing shoes and was probably getting ready for bed himself. Although I saw the family dog at the end of the little girl’s bed, it took several reads to watch the expression on the dog’s face change in response to each question and answer. I did take note that the little girl’s questions had a lot to do with the world of science and when the entire bedroom is seen we understand why by the objects in her room.

Award-winning illustrator Isabelle Arsenault matches Mac Barnett’s brevity and whimsy of text with her muted colors (just ready for lights out), and subtle emotionality. The title of Barnett’s story is made up of the two words we parents are too often tempted to use when responding to a child’s never-ending questions. Of course, none of Dad’s answers have anything to do with reality or science. The daughter, obviously a clever child, couldn’t care less, her reality is time spent with her dad, and he delivers in spades. Just Because is such a keeper.  –  Sunny Solomon

Also available by Mac Barnett: Kid Spy (series); Jack Blasts Off!; Hi, Jack; The Important Thing about Margaret Wise Brown; The Terrible Twos (series); The Wolf, The Duck & the Mouse; I Love You Like a Pig; Places to Be; Noisy Night; The Magic World; How This Book Was Made; The Rules of the House; Leo a Ghost Story; Sam & Dave Dig a Hole; The Skunk; Telephone; President Taft is Stuck in the Bath; Battle Bunny; Count the Monkeys; Brixton Brothers (series); Oh No! Not Again; Chloe and the Lion; Extra Yarn; Mustache; The Clock Without a Face; Guess Again!; Billy Twitters and his Blue Whale Problem; Square; Triangle 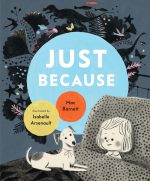 Sunny Solomon holds an MA in English/Creative Writing, San Francisco State University. She is a book reviewer for “The Clayton Pioneer” and her poetry and other writing has been published in literary journals, one chapbook, In the Company of Hope and the collection, Six Poets Sixty-six Poems. She was the happy manager of Bonanza Books, Clayton, CA and Clayton Books, Clayton, CA. She continues to moderate a thriving book club that survived the closure of the store from which it began. Sunny currently lives next to the Truckee in Reno, NV.
More from this reviewer
PrevThe Wave, in Pursuit of Rogues, Freaks, and Giants of the Ocean
Bradstreet GateNext