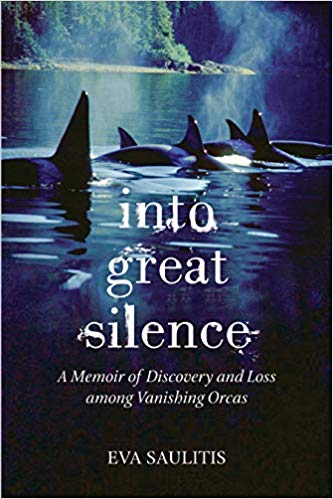 Eva Saulitis’s memoir, Into Great Silence, is an astute blend of scientific discovery and imaginative creativity. For more than a decade, Saulitis spent her summers at Whale Camp on Prince William Sound. She was tracking the Chugach transients, a small pod of orcas, twenty-two killer whales that between the summer solstice and the autumnal equinox spent time swimming in the vicinity. She took notes on their behavior, recorded their verbal interactions, and photographed them whenever they surfaced. Her findings became her Masters’ thesis and later were published in two scientific journals.

As those summers progressed, Saulitis found herself thinking more poetically and doing more and more journaling. Her science never slackened, but her mind began to perceive her surroundings in different ways. When the pod started shrinking, and not reproducing, her notes changed tone. Alongside her scientific observations, she began musing on the pod’s fate and on her own “discovery and loss” as she watched the orcas’ struggles.

Written twenty years later, but including many of those journal notes, Into Great Silence updates recent scientific findings about orca behavior, vocalizations, and genetics. Anyone interested in the behavior patterns of these mighty killer whales will be fascinated. Just as important, and just as fascinating, is the course of Saulitis’s personal foray into the scientific community and into the Alaskan way of life. A summer job, taken when she was twenty-four, burgeoned into a lifetime affinity. During her time at Whale Camp, she developed more self-confidence, both in her scientific theories and in her interactions. Looking back at her younger self, Saulitis examines her youth as judiciously as she watches the orcas day by day.

Two major events make Into Great Silence all the more poignant. The first occurs near Whale Camp, on March 24, 1989, when the Exxon Valdez strikes Bligh Reef and spills nearly 11 million gallons of crude oil into Prince William Sound. What had been idyllic during Saulitis’s first summer there turns into a grotesque nightmare. Globs of oil float throughout the spill zone, clotting the beaches and decimating the resident animal populations. Hordes of clean-up crews arrive, with differing opinions about the best cleansing methods to use. Sometimes the scientists are consulted, sometimes not. Young Saulitis watches a pristine world suddenly overrun by seaplanes, helicopters, and watercraft. The cataclysmic event provokes interesting scientific questions, however—how does the influx of motors affect the orcas’ sonar communications, and how does the spill affect the whales’ food supply and how they digest their intake? So the Exxon Valdez affects Saulitis professionally, as her research questions change according to what she observes. The intriguing science, however, plays second fiddle to the horrendous changes the spill brings to the region.

The tragedy affects the way Saulitis perceives Alaska as outsiders extract its resources and take little responsibility for the havoc that can ensue. This leads to the second event that underpins Into Great Silence. Saulitis is putting her memoir together, rereading old journals and reimagining the past, while she is undergoing chemo for breast cancer. Writing about the orcas’ discovery and loss, she imaginatively puts herself in their fatal situation. Saulitis never dwells on the cancer, but it’s there in the background, made all the more poignant by the Homer bookseller who sold me the book. “A magnificent memoir,” the saleswoman said. “It’s a shame that Eve died right after she finished writing it. She lived here in Homer, you know, and led creative writing seminars in the summer. A very gifted woman. We all miss her a lot.”  – Ann Ronald 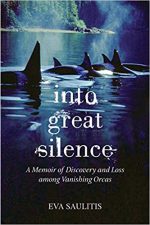 Ann Ronald is a retired English professor from the University of Nevada, Reno. Author of dozens of reviews, she’s also written a number of books about the American West. They include literary studies such as The New West of Edward Abby and Reader of the Purple Sage, cultural studies such as GhostWest and Oh, Give Me a Home, and nature writing such as Earthtones: A Nevada Album. Her latest is a work of fiction, Friendly Fallout 1953. Since retiring, she’s been reading vociferously, so “Bookin’ With Sunny” is giving her a wonderful opportunity to share thoughts about her favorite new discoveries.
More from this reviewer
PrevThe Unleashed Hearts
A Long Way HomeNext