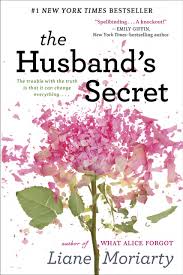 Australian novelist Liane Moriarty poses an intriguing question: what might occur if/when a wife unwittingly/purposely unearths a heretofore hidden, horrific marital secret? What might happen, not just to their marriage and to their children, but to the lives of friends and acquaintances and even strangers? I’m not giving away any of the novelist’s secrets by quoting the final two words of The Husband’s Secret. The last paragraph suggests that some secrets are better revealed, while others are better kept undisclosed. “Ask Pandora,” the novel ends. I can’t think of a more fitting conclusion for this complex narrative of privacy and public knowledge.

Moriarty’s story is set in motion when a Sydney housewife accidentally tips over a box in her attic and finds a letter labeled “For my wife, Cecelia Fitzpatrick, to be opened only in the event of my death.” Here is Cecelia’s dilemma—her husband is very much alive, she habitually respects his wishes, and now she is dying to tear open the envelope. As she sits and ponders, Moriarty introduces other characters who appear to have no relation whatsoever to Jean-Paul Fitzpatrick’s confession. Tess is coping with her own husband’s unfaithfulness, and Rachel is still trying to come to terms with events long past. The reader suspects that each of these new women eventually will be touched by John-Paul’s revelation, but how and why is part of the mystery of the book.

The Husband’s Secret is not a mystery novel, however. Although the plot involves layer upon layer of camouflaged circumstances, the tension derives from how each of the characters interacts with what is known, unknown, revealed, and kept hidden. Moriarty isn’t concerned with hiding the secret itself. Rather, her focus centers on the impact secrets have upon our lives. She muses a lot, in fact, about what secrets do to marriages and, in turn, to children and grandchildren. Cecelia, the ostensibly perfect wife and mother, finds her world and her family’s world turned topsy-turvy. Tess and Rachel’s lives are disrupted, too, simultaneously unraveling and then knitting back together.

Writing a review of The Husband’s Secret of necessity involves keeping a lot of secrets. I have found myself rewriting my sentences, crossing out any words that might give away anything about the women’s stories, even discarding whole paragraphs that might say too much. Better to let you, the reader, discover what lies buried in Jean-Paul’s letter to his wife. Better that you also wonder for yourselves how secrets cover up more secrets and how lives are thus affected by the things we all prefer not to reveal.

Clearly Liane Moriarty wrote The Husband’s Secret for women readers, but the complications she introduces and the conclusions her characters reach are applicable to husbands as well as wives. The universality of this novel outweighs any superficial labels. Needless to say, I liked the book a lot. Not only are the characters engaging, but the questions raised are provocative and often profound.   – Ann Ronald

Ann Ronald is a retired English professor from the University of Nevada, Reno. Author of dozens of reviews, she’s also written a number of books about the American West. They include literary studies such as The New West of Edward Abby and Reader of the Purple Sage, cultural studies such as GhostWest and Oh, Give Me a Home, and nature writing such as Earthtones: A Nevada Album. Her latest is a work of fiction, Friendly Fallout 1953. Since retiring, she’s been reading vociferously, so “Bookin’ With Sunny” is giving her a wonderful opportunity to share thoughts about her favorite new discoveries.
More from this reviewer
PrevEmpires, Nations and Families
Mother, MotherNext