Farthest Field, An Indian Story of the Second World War

Two and a half million Asian Indians volunteered to fight in World War II. It was the largest volunteer army ever assembled. It was and remains a “forgotten army.”

When Winston Churchill designated British Empire’s “finest hour” he was referring to a relatively small group of RAF pilots. Neither during the Battle of Britain nor later when the British army in Burma strikingly defeated the Japanese did either he or many other Britons think about adding Indian soldiers to the “finest hour” encomium. General William Slim, commanding general of the 14th British Army, of which the Indians were a part, was one of the few British leaders to acknowledge their manifold contributions, superb valor, and foreshortened lives. When India achieved independence in 1947, the new nation promptly forgot the contributions made by Indians during World War II. In fact, their soldierly service on the side of their British colonial overlords was an embarrassing memory fit only for repression and resentment. And repressed it has been. Indian’s WW II volunteer army plays no part in school texts about the history of India.

Raghu Karnad’s Farthest Field is one Indian’s attempt to stage a rescue mission, an effort to recover a lost history. On the surface, Karnad’s aims are small: to discover and interpret the roles of three of his soldier-ancestors during the war. His maternal grandfather, Ganny, was a military doctor. Ganny’s two brothers-in-law (Karnad’s grand-uncles) Bobby and Manek served, too. Bobby was an engineering officer responsible for building roads, bridges, and planting explosives. Manek was a fighter pilot who flew close air support missions. None of them had many qualms about helping Britain fight the war against the Japanese because each believed that Japan’s “freeing” India from the British would not likely improve their lot. They would probably be exchanging one form of colonial control for another.

In Farthest Field, Karnad is not content, however, to try to discover the story of his relatives’ military service in World War II. He sees their story as inherently connected to the larger saga of India’s history during the war. “From the start, to learn what happened to my grandfather and grand-uncles was to discover the lost epic of India’s Second World War, as well as the reasons we [India] chose to discard it.” Throughout Farthest Field, Karnad incorporates the perspective of a “discarded epic,” a part of the national story that has been lost. For him, the book is a lament for the relatives he never knew and for India’s refusal to acknowledge, much less embrace, the 2.5 million who served and the 36,000 who died. A recently built shrine to Indians who have died in service to the nation includes only those who have died since 1947, the year India achieved independence. As for the forgotten World War II dead, “Their faces were lit by the candlelight of private memory, till even that dwindled and was gone.”

It is not easy to classify Karnad’s book as strictly non-fiction. The author insists that he delves into fictional motifs only when compelled by the evidence to do so. That is, he insists that he is only interpreting the evidence in such a way as to fill in the gaps for the benefit of coherence and narrative drive. He describes his work as “forensic nonfiction.” Still, he crosses the line into fiction when he employs extensive, but imaginative, conversations to convey message and meaning. He recognizes and admits that memories of events that happened seventy years ago are unreliable because memories are less perishable than malleable. They are palimpsests. Every time a memory is recalled it is subtly changed, added to, or subtracted from. As a result of his nuanced writing, Farthest Field is an exquisite book. Karnad is a wonderful writer with a sense of humor. He knows how to turn a phrase. The book exudes his insights born of prodigious research and his emotional commitment to both his family’s and India’s history. His grandfather would have been proud. – Neal Ferguson

This is Raghu Karnad’s debut novel. 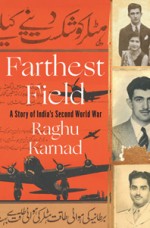 Neal Ferguson is a self described Anglo-phile. After studying for a PhD in British history and doing research for a year in various British archives, he came to the University of Nevada in 1970 to teach. Soon he found himself in administration where he remained until 2003. After returning to full-time teaching a decade ago, he decided to concentrate his teaching energies on Medieval British history and various global aspects of World War II. Dedicated to Ambrose Bierce’s proclamation that the purpose of war is to teach Americans geography, Neal insists that his students accompany him (in class) to sundry east European rivers and steppes, African deserts and jungles, south-east Asian mountain ranges and peninsulas, and small islands and coral reefs in the Pacific. Currently he is writing a book about the ups and downs of General Douglas MacArthur’s military reputation.
More from this reviewer
PrevThe Expatriates
Tahoe Blue FireNext