Home » Reviews » British Authors » Dynasty: The Rise and Fall of the House of Caesar

Dynasty: The Rise and Fall of the House of Caesar

Dynasty: The Rise and Fall of the House of Caesar

You may have seen the TV show of the same name, but this Dynasty is the better story and not just because it is first-rate history. Its subject is the early rulers of the Roman Empire rather than grubby capitalists. It’s also more entertaining. It would be difficult for anyone to make up characters like these although Game of Thrones comes close.  Just naming the five Roman emperors included in the House of Caesar (also known as the Julio-Claudians)—Augustus, Tiberius, Caligula, Claudius, and Nero—evokes powerful emotions: fear, disgust, admiration, envy, and mistrust to suggest only a few.

The Rise and Fall of the House of Caesar may rightly be considered volume two of Tom Holland’s study of the Caesars. The first volume, Rubicon, opens the story by examining two of the most evocative murders in Western history: the excruciating demise of the Roman Republic and the assassination of Julius Caesar.  Dynasty explores the genesis of Imperial Rome. (A pause here for a technical aside: Rome was a Republic because it had no king; the early Roman Emperors beginning with Augustus clung tenaciously to the myth of the Republic even though subsequent historians generally name Augustus as the first Roman Emperor.)

The Rise and Fall of the House of Caesar begins with the attack on Julius Caesar, dwells on the success of his heir Augustus during the decade long civil war that followed, and then slides into the muck precipitated and encouraged by Tiberius, Caligula, Claudius, and Nero.  Not even Edward Gibbon is his Decline and Fall of the Roman Empire felt much obligation to examine the ninety years encompassed by these five Emperors.

Tom Holland is a superb historian and stylist. Even though his academic credentials are robust, he is not an academic historian. He is a storyteller, as was Barbara Tuchman, and consequently knows how to keep us eagerly turning the pages even when we vaguely know or remember the biographies of these famous Romans.  It’s wonderful to have my memory refreshed by an accomplished writer who expertly parcels out the anecdotes while sustaining razor-like political analysis.

These Roman Emperors, however, do not skip blithely through the streets of Rome and parts of the far-flung Empire. Holland sketches an ever-changing dangerous background against which the Emperors’ actions take on special significance. It’s not just enough that Augusts works mightily to keep alive the fiction of the Republic’s continued existence. To some degree, Augustus actually believed that he was only “the first citizen.” Concurrently, the Empire was replacing the Republic and aristocratic hegemony was being eroded by Emperors who increasingly abandoned the virtues of Republican Rome and who became incrementally ever-closer to gods on earth. Holland carefully lays out the trajectory from Augustus to Nero. We are not left to guess or infer. It is often a lurid story, illustrative of Lord Acton’s famous phrase:  “absolute power corrupts and absolute power corrupts absolutely.”

“Caesar’s wife must be above suspicion” is one of those clichéd phrases that passes for truth about the expected virtue of Roman aristocratic women.  Although Holland does not pass judgment on the historical accuracy of such expectations, he does analyze Roman sexual behavior among both men and women of patrician rank.  In so doing he shows both the breadth and depth of his knowledge of Roman social history and mores.  In these depictions, spread over several chapters, he writes some paragraphs that are so deep, well constructed, and penetrating that they left me agape and also chagrined by the realization that I have never and will never write such prose. Wow! is the only apt word to describe his prose and his descriptions of the increasingly bad behavior of Roman aristocratic women during the years encompassed by Dynasty.  They were perhaps never as dissolute as their men folk but not for want of trying.   – Neal Ferguson

Also available by Tom Holland: Rubicon; The Shadow of the Sword; Persian Fire; Millennium; Lord of the Dead; Contours of Pauline Theology; The Sleeper in the Sands; Slave of my Thirst; Deliver Us from Evil; Supping with Panthers; The Bone Hunter; The Forge of Christendom; The Vampyre; The Poison in the Blood; Fright Night 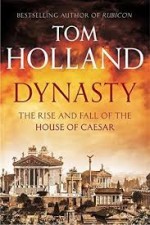 Neal Ferguson is a self described Anglo-phile. After studying for a PhD in British history and doing research for a year in various British archives, he came to the University of Nevada in 1970 to teach. Soon he found himself in administration where he remained until 2003. After returning to full-time teaching a decade ago, he decided to concentrate his teaching energies on Medieval British history and various global aspects of World War II. Dedicated to Ambrose Bierce’s proclamation that the purpose of war is to teach Americans geography, Neal insists that his students accompany him (in class) to sundry east European rivers and steppes, African deserts and jungles, south-east Asian mountain ranges and peninsulas, and small islands and coral reefs in the Pacific. Currently he is writing a book about the ups and downs of General Douglas MacArthur’s military reputation.
More from this reviewer
PrevThe Rise of the Red Queen
Painted HorsesNext