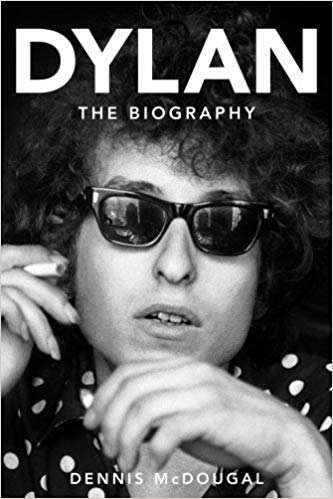 “The answer my friend, is blowin’ in the wind.” So what was the question? At seventy-two, Bob Dylan’s hundreds of songs have become an iconic part of American culture. The man himself remains an enigma. Dylan the Biography is only the latest of numerous attempts to document Dylan’s life and work. To be sure, many facts are not in dispute, from his birth as Robert Allen Zimmerman to Jewish parents in Hibbing, Minnesota, to Barack Obama awarding him the Presidential Medal of Freedom seven decades later in 2012.

In between, Bob Dylan not only changed his name but re-invented himself numerous times as a poet, artist, and musician. Is he a folk singer in the tradition of Woody Guthrie? Is he a country singer like Hank Williams and Johnny Cash? It’s clear that Bob Dylan absorbed many musical traditions, but felt no obligation to identify with only one. Dylan’s 1965 decision to amplify and go electric puzzled some and angered many. Does that make him a rocker?

Biographer Dennis McDougal documents the bare facts of Dylan’s personal life: his relationships with many women, his fathering numerous children. It may surprise some to learn that he took a genuine interest in the raising and education of his offspring. Imagine running into Bob Dylan at a parent-teacher conference or a PTA meeting. Then there is the episode of becoming a born-again Christian, associating himself with the California fundamentalist movement known as The Vineyard. Then, a year or so later, Dylan walks way from it, never looking back.

For Dylan lovers, there are books, a biographical encyclopedia, and dozens of bootleg tapes. One of the most reliable, loyal, and persistent of the Dylanistas is Paul Williams. Founder of the pop journal Crawdaddy. Williams is quoted frequently among the 500 footnotes in Dylan the Biography. In 1978 Bob Dylan wrote and directed the feature film Renaldo and Clara. It costarred Joan Baez. McDougal quotes sources and concludes that this independently made production must have been a cinematic disaster. Not so says Brad Stevens in Video Watchdog, the Perfectionist’s Guide to Fantastic Video, #154 (2010). Stevens calls for a drastic reassessment, adding that the film is hardly deserving of its reputation as pretentious and incoherent. He rates it superior to Todd Haynes’ more recent I’m Not There (2007). But just try to find Renaldo on DVD or Blu-ray.

Not everyone has praise for Dylan. Joni Mitchell says everything about Dylan is a deception. Others point out that he plagiarized, or shall we say recycled, concepts and phrases from any number of well-known poets. Even some of his drawings echo some elements of paintings by others as pointed out by the New York Times covering a Manhattan exhibit.

No one can argue with Dylan’s ability to overcome addictions. As proof of his recovery, he continued to give over a hundred concerts a year into his fifties and sixties. Any pop star will tell you, this is where you make your income. Since the advent of file-sharing, record albums are useful for promotion, not so much for generating cash. Nevertheless, Bob Dylan has always been a prolific recording artist. McDougal maintains that despite many high points, the quality of Dylan’s recorded work is wildly uneven.

The real problem for the Dylan biographer is the solid wall of secrecy erected by the Dylan organization. Certainly, Bob Dylan has always been a master of disguise and misdirection. Dylan The Biography has plenty of interviews with associates and ex-girlfriends, and McDougal gathers thousands of important facts, dozens of them on every page. There’s value in that, but McDougal wasn’t able to score an exclusive one-on-one with the man himself. It probably would not have made much difference if he had. For those probing for the real Bob Dylan, the answer will always be “blowin’ in the wind.”   – Dan Erwine 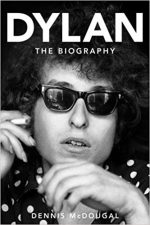 Dan Erwine holds a BS in Telecommunications, San Diego State University. Dan recently retired after four decades in radio broadcasting. His background San Diego stations KFSD and NPR's KPBS, and KUNR, Reno, NV. Over the years, Dan has produced and hosted a number of talk shows and interviewed over five thousand writers in almost every genre and career, from such notables as David Brin to Seamus Heaney, Allen Ginsberg, Judy Collins, Charlton Heston and Wally Schirra. Dan is a comic book aficionado and has a special interest in film, science fiction and mystery. He lives with his wife in Reno, NV.
More from this reviewer
PrevThe Ordinary Truth
The Ginger ManNext