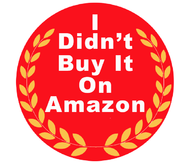 I Didn’t Buy It On Amazon

Everyone who comes to Bookin’ with Sunny knows that I wholeheartedly support independent bookstores. Several months ago I removed the Amazon button from my website. Of course if a visitor wants to buy the books we review from Amazon, they can, just not directly from our site. Visitors can still buy a book directly from IndieBound stores, those bookstores belonging to that organization. I support those stores and others that are independent, but not members of IndieBound. And I strongly support used bookstores, although the bookseller is the only person who profits from used books.

Friends and family have heard me rant for years about what I think is Amazon’s threat not only to bookstores and the health of our local economies, but American literature itself. Now that Hachette (a major publishing company) and Amazon have locked horns, I can finally talk about Amazon without a knee-jerk response.

The Los Angeles Times published a nifty article by Carolyn Kellogg about the standoff, Amazon and Hachette: The dispute in 13 easy steps. Of all the articles I’ve read about Amazon and its attack on Hachette, the company, and Hachette’s authors, Kellogg’s piece is one of the clearest.

Then who can forget Stephen Colbert’s march into the fray? And we have Mr. Colbert to thank for the bright red stickers to slap onto every book not bought from Amazon. Par for the course, Mr. Colbert makes us laugh, but he also points out Amazon’s seldom talked about subject of its attack on writers.

Next, one of my favorite authors, Sherman Alexie, came on Colbert’s show to go one better by encouraging us to not buy anything from Amazon,

And one of the most meaningful rants was spoken by author James Patterson. He, too, is concerned about the fate of American literature. Not only has Patterson addressed the issue of Amazon’s pricing, but it’s deep rooted effect on reading. Patterson is now actively involved in the support of both libraries and independent bookstores.

Authors aren’t the only folks fighting back, take a look at what one bookseller, Robert Sindelar of Third Place Books in Seattle (Amazon’s home territory) did about pre-ordering J. K. Rawlings (Robert Galbraith) latest book from Hachette:

Last but not least of my links is Tony Horwitz’s article from the NYT June 20, 2014. Horwitz debunks Amazon bestseller ratings. This is also worth reading.

I’ve already written about those “for hire” reviews appearing in Amazon, and then again I posted links to articles about Amazon’s pricing.

What I hear most often from Amazon book buyers is that Amazon prices are the lowest and they get the book quickly (unless a Hachette publication). I’m not sure how much we actually benefit from either. How much richer are you for having bought your books through Amazon, especially the eBooks? Is a new house in your future? Maybe that new car? And about speedy deliveries: if the purchase is a hardcover or paper, do you actually sit down and read the book as soon as it’s delivered? Have you asked your local bookstore how quickly they can get the same book for you? You can buy the eBook from your local bookstore. Hey, they even have e-devices (Kobo) to sell you if you don’t have one already. Egads! Most can deliver a book, if not in stock, in one or two days. And what if the wait is even longer? Since when did we readers become so addicted to reading that we can’t stand to wait? It makes us sound like children: “I want it, I want it now.” Wah, wah, wah. (I knew I couldn’t get through this without some knee-jerking.)

I do not pay for the majority of the books we review at Bookin’ with Sunny, but the publishers have no guarantee that we’ll like what they’ve sent us enough to recommend it. Whatever books I do continue to buy (more than I should) are purchased from independent bookstores, new and used.

Amazon tells its customers that it wants to sell books at the lowest possible prices for the good of the reading public and now believes it can strong-arm readers into which books they can buy. I think we readers need to tell Mr. Bezos that we can’t afford his books at any price. – Sunny Solomon

The Heron’s Cry, sequel to The Long Call