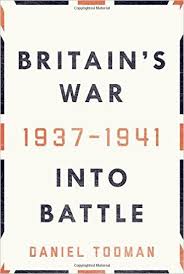 Looking to give a book to a guy in your life? If he’s a World War II buff, you might consider giving this book a try. The first of two volumes, Britain’s War: Into Battle, 1937-1941, is a panoramic analysis of Britain’s greatest challenge since 1066. In sporting terms, at the end of the first half (end of 1941), the score was more or less tied but with a slight edge to the Germans even though the Soviets had just staged a gut-checking goal-line defense outside of Moscow. And, Britain recently had called up Uncle Sam from the injured reserve, recovering as he was from a Japanese judo chop.

So much for sports metaphors. Todman’s Britain’s War is a serious book although it is written with panache and a subtle sense of humor. His father, born in May 1945, was named Victor assuring “that he would spend the rest of his life as a war memorial.” Todman’s style includes a respectful blend of academic and informal usage such as when he writes demobbed (demobilized) without quotation marks to describe soldiers’ return to civilian life.

Your World War II enthusiast might shrug, “So what? Everyone knows the story that begins with Munich and churns on through Poland, the Phony War, the Battle of Britain, and the Blitz.” Britain’s War treads lightly on some of the more familiar territory because Todman’s intent is not merely to rehash the stories that have been the staples of movies, popular books, military histories, and the History Channel. Rather, Todman’s achievement is to weave together stories that are usually told, if told at all, as separate threads. In this first of two volumes, the reader will look at events through many lenses including strategic, political, economic, social, military, and cultural. Todman’s performance in writing this book is impressive. Its organization frequently foreshadows important events that help the reader maintain orientation in the midst of a complex narrative.

When I read a book about this period of British history, one of the things I look for is the author’s treatment of Winston Spencer Churchill. “Winnie” cannot be ignored. He is a colossus. Who else but a Nobel prizewinner in Literature would dare to claim that he expected to be treated well in history “for I intend to write it”? By all accounts, he had a checkered career during the first four decades of his political career, but from 1939-45 he helped Britain overcome Darth Vader. Even so, serious historical accounts of Churchill during these years fall on a continuum from fawning to disparaging. Todman’s treatment of Churchill lands somewhere in the middle of the spectrum, perhaps a step in the direction of disparaging. For instance, he mostly ignores those famous Churchill speeches. Nevertheless, Todman acknowledges that shortly after he began his “Finest Hour” broadcasts, his standing with the British public soared as measured by the British Institute of Public Opinion, the British version of the American Gallup Poll. Likewise, he is critical of Churchill’s short-sightedness as regards India’s role in World War II (and much else), but gives him due kudos for his tenacity in regard to courting FDR.

As befitting a book about “total war,” Todman’s Britain’s War investigates the impact and conduct of the war from the top to the bottom of British society. An old Austrian-born professor of mine loved to say—in his soft German accent—“some histories are about drums and trumpets. I prefer those about bums and strumpets.” Todman would cheerfully agree; he carefully interweaves the experiences and contributions of a wide swath of Britons. I await the publication of his second volume with eagerness.   –  Neal Ferguson 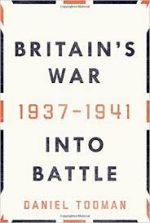 Neal Ferguson is a self described Anglo-phile. After studying for a PhD in British history and doing research for a year in various British archives, he came to the University of Nevada in 1970 to teach. Soon he found himself in administration where he remained until 2003. After returning to full-time teaching a decade ago, he decided to concentrate his teaching energies on Medieval British history and various global aspects of World War II. Dedicated to Ambrose Bierce’s proclamation that the purpose of war is to teach Americans geography, Neal insists that his students accompany him (in class) to sundry east European rivers and steppes, African deserts and jungles, south-east Asian mountain ranges and peninsulas, and small islands and coral reefs in the Pacific. Currently he is writing a book about the ups and downs of General Douglas MacArthur’s military reputation.
More from this reviewer
PrevDu Iz Tak?
The Skeleton CrewNext