Bring up the Bodies 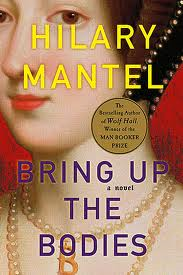 With this novel Hilary Mantel joins a short list of novelists who have won two Booker Prizes since the competition’s inception in 1969. Bring Up the Bodies is the second installment of what she has promised will be a trilogy. The first was Wolf Hall, a Booker winner, and previously reviewed by Ann Ronald on this blog a while back. The third novel The Mirror and the Light is scheduled for 2014 publication. Unless Mantel changes course the third will weave a heavily textured tapestry, the center piece of which will be the rise, fall and death—by beheading of course—of Thomas Cromwell the protagonist of the two previous novels. In Wolf Hall, we are shown how Cromwell accomplished his personal rise within the court of Henry VIII, a rise that appears to have come at the expense of Henry’s VIII’s Chancellor, the famous Sir Thomas More. In this the second novel in the trilogy, Thomas Cromwell continues his ascent from the son of a nobody to chief councilor to the King, a rising trajectory that necessarily becomes entangled with the rise and fall of Anne Boleyn, she “with her head tucked underneath her arm.”

As a novel, it falls into the category of historical fiction rather than fictional history. The people analyzed and the events finely chronicled by Mantel were real; they happened. Many of the people and events have been the subject of a continual flood of histories, novels, plays, poems, movies, songs, beatifications, and other ephemera. In its broadest outlines the story is well-known; it is no exaggeration to claim that it is part of the common culture of the English-speaking world although you don’t have to be a Tudor enthusiast to get caught up in the drama of Henry VIII, his six wives, and religious reformations. On this well-known historical skeleton Mantel organizes and attaches flesh, organs, sinews, nerves, motives, and emotions. The result is an imaginative and imagined narrative that delighted me. Her ability to blend fact with fiction in a stylistic tour de force left me gasping at times.

The novel is organized as a cascading narrative. It contains few flashbacks or stories that begin in the middle. Bring up the Bodies begins at the beginning: the summer after Thomas More’s date with the headsman in July 1535. It ends ten months later with Anne’s similar decapitation. In between Mantel slows the pace occasionally to provide her readers with enough back fill to prevent us from getting lost in the pell-mell events of that foreshortened year. I call this approach narrative with lumps, an idea borrowed from J.H. Hexter, an academic historian of some merit who extolled the virtues of narrative history. Mantel’s telling is a ripping good story. Admittedly, it would be difficult to make up the shattering events—personal, political, religious—that provide the skeleton for Mantel. It is her particular genius that she is able to respect both the actual events and the real people and to provide them with rich inner lives and complex outward behaviors, most of which are imagined but all of which are convincing.

Her approach to Thomas More marks one difference between her and Shakespeare, and in this case, Mantel’s approach is preferable. In Richard III, Shakespeare gives us a portrait of evil. We are delighted with Richard’s self conscious efforts “to prove a villain.” In the end, Shakespeare’s King Richard is a cartoon character, the villain of a melodrama, an unconvincing albeit entertaining psychological and physical cripple. By contrast, Mantel rescues Thomas Cromwell, warts and all, from being typecast as a villain—the judicial murderer of the “sainted” Thomas More in A Man for All Seasons. Mantel’s Cromwell escapes villainy by her providing him with a rich inner life and complex motives; we are encouraged to view him as a self-made man of uncommon pluck, intellect, subtlety, and political instinct. I found myself rooting for him against the Boleyns. For Mantel, Cromwell was the power behind the throne, a power broker who made his prince a Machiavellian poster boy. In the process, the up-start Boleyns were stymied and then destroyed by the up-start Cromwell. It’s an entertaining twist on the notion of careers open to talent.    – Neal Ferguson

Also available by Hilary Mantel: Wolf Hall; Every Day is Mother’s Day; Vacant Possession; The Giant, O’Brien; An Experiment in Love; Beyond Black; Giving up the Ghost; A Change of Climate; A Case of Greater Safety; Fludd; Eight Months on Ghazzah Street; Learning to Talk;

Neal Ferguson is a self described Anglo-phile. After studying for a PhD in British history and doing research for a year in various British archives, he came to the University of Nevada in 1970 to teach. Soon he found himself in administration where he remained until 2003. After returning to full-time teaching a decade ago, he decided to concentrate his teaching energies on Medieval British history and various global aspects of World War II. Dedicated to Ambrose Bierce’s proclamation that the purpose of war is to teach Americans geography, Neal insists that his students accompany him (in class) to sundry east European rivers and steppes, African deserts and jungles, south-east Asian mountain ranges and peninsulas, and small islands and coral reefs in the Pacific. Currently he is writing a book about the ups and downs of General Douglas MacArthur’s military reputation.
More from this reviewer
PrevA Bushel’s Worth
Shameless and Plotting TemporalityNext