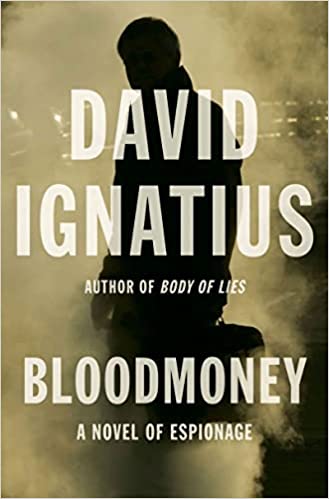 David Ignatius writes novels about what he knows best. As a Wall Street Journal reporter for ten years, he covered the Department of Justice, the CIA, and the Senate. Now a columnist for the Washington Post and a regular panelist on cable television, he continues to write and talk about Washington D.C and. Middle East issues. Meanwhile, he writes fiction, too—seven novels about espionage and undercover machinations. His latest, Bloodmoney, is one of his best.

Focusing on Pakistan, Bloodmoney describes exactly what its title implies. Simultaneously from a Pakistani angle and a CIA angle, the narrative traces financial and computer transactions that underwrite violence and revenge. Trying to ‘follow the money’ is Sophie Marx, a young CIA officer who finds herself enmeshed in an increasingly tangled web of double-dealing and intrigue. A malevolent cast of characters surrounds her, none of them honest and none of them trustworthy at all. In fact, the duplicitous conversations between a high-ranking CIA official and a Pakistani general are some of the most casuistic I’ve ever read. A study in chicanery, they exemplify the distrust that is rampant in the world of spies.

Sophie Marx is no angel, and she functions exceedingly well in this ambiguous world. Her task is to figure out why a number of CIA agents are being killed in apparently unconnected parts of the world. The link? The money. ‘Bloodmoney’, that is. The more she learns, the more danger surrounds her; and the more she realizes that she herself is being deceived by her own employers. Can she extricate herself from peril? Can she outwit her enemies? Unlike many other spy thrillers, however, the violence that occurs isn’t gratuitous and the plot intricacies actually stretch the reader’s mind.

For two quite different reasons, Bloodmoney is well worth reading. First, it is a window into the Pakistani mindset, or at least Ignatius’s understanding of a country he knows well. His Pakistani characters often speak in proverbs and tell stories with underlying meanings. Indirection is key. Also clearly expressed in the novel are Pakistani notions of honor and revenge. The Pakistani word “is badal, the insult that answers insult.” Badal provides the motivation that initiates Bloodmoney’s plot. Reading this book, I found myself rethinking today’s real-life headlines, and yesterday’s, and tomorrow’s. I think Ignatius even drops a clue as to why Pakistan may have harbored Osama Bin Laden, though neither he nor his Pakistani characters ever say so directly.

Second, the novel explores and explains another critical twenty-first century environment, the world of hedge funds and global finance. Ignatius himself studied economics at Cambridge University, so he is more than familiar with the London Stock Exchange (where the ‘bloodmoney’ is laundered in untraceably intricate ways). If badal is the motivation, insider trading is the methodology that moves the story line along. Compromised computer programs, Swiss bank accounts, flash drives, billion dollars lost and found, a plethora of dodgy economic deals. Again, I found myself thinking about headlines. I know I was reading a novel, but I wondered how much truth was underlying the fiction.

That’s what makes Bloodmoney a book to be pondered. Its fiction is close enough to fact to be provocative. When I open a newspaper tomorrow, or a click on a website, or even read a newsworthy blog, if there’s something about Pakistan or about hedge funds or insider trading, I’ll think of this novel for sure.

Also available in Paper/Hard Cover/Kindle/Audio is Agents of Innocence; Body of Lies; The Increment 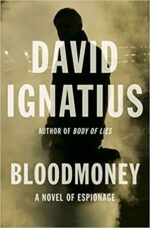 Ann Ronald is a retired English professor from the University of Nevada, Reno. Author of dozens of reviews, she’s also written a number of books about the American West. They include literary studies such as The New West of Edward Abby and Reader of the Purple Sage, cultural studies such as GhostWest and Oh, Give Me a Home, and nature writing such as Earthtones: A Nevada Album. Her latest is a work of fiction, Friendly Fallout 1953. Since retiring, she’s been reading vociferously, so “Bookin’ With Sunny” is giving her a wonderful opportunity to share thoughts about her favorite new discoveries.
More from this reviewer
PrevPoets’ Guide to America
Eye of the RavenNext