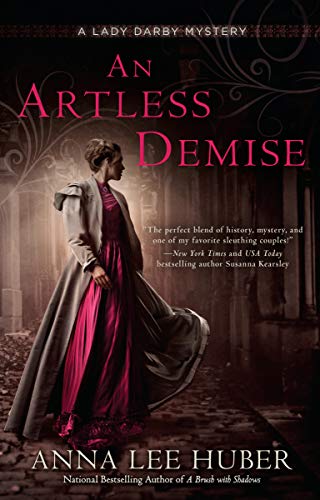 I initially encountered Anna Lee Huber’s mysteries in 2012 when her first novel featuring Lady Kiera Darcy, The Anatomist’s Wife, was published. Now I’ve just finished reading the seventh in the series, An Artless Demise, and I continue to be a great fan. Set in nineteenth-century London, these books contain sharply-drawn characters with strong personalities, well-pictured pre-Victorian settings and scenes, plus a keen sense of history. An Artless Demise, for example, takes place in 1831, just as the Reform Bill was being fiercely debated in the House of Lords. The political disagreements among the “ton” (upper, upper class) society, along with the snobbery of the peers, add even more local color to Huber’s tale.

As the first title suggests, Lady Darcy was married to an anatomist, a physician who studied human anatomy at a time when acquiring corpses for dissection involved highly illegal machinations. His unexpected murder revealed far too much about his medical (mal)practice, and it also exposed his wife to gossip and innuendo (not to mention the fact that she was a prime suspect of the crime). In An Artless Demise, her past continues to haunt her. This novel also centers on body snatching, corpse stealing, and even the murders of vagrants in order to procure bodies for training student doctors. Ugly memories and accusations resurface. She and her new husband must solve an unfolding set of crimes in order to free her from the taint of ton gossip that still follows her everywhere.

Lady Darcy met Sebastian Gage when her first husband was killed.  He is what was then called an “agent,” and what we today would call a private detective.  Now that she and Gage are married (you need to read the other novels in the series to track the phases of their courtship), they work as agents together. Gage’s father, Lord Gage, is an agent, too, at a time when the London police were ill-equipped to solve murders and also when the upper classes were loath to give lowly-regarded coppers access to their secrets.  The aristocratic Gages are trusted by the ton, and thus can investigate behind closed doors.

As Huber acknowledges at the end of An Artless Demise, body snatching was a very real problem in London at the time. Some of the major scenes in her novel depict true events, including a specific murder, the ensuing trial, and the hanging of the culprits. Other episodes are factual, too. While her ton lords and ladies are imaginary, their actions and conversations grow out of the careful research Huber conducted while studying the conflicting opinions about the study of anatomy in a time when medical research was increasing. A reader with an interest in London in the early 1830s will be intrigued.

The five novels in between The Anatomist’s Wife and An Artless Demise take Lady Darcy away from the confines of London, partly because London society has made her so uncomfortable in the city. The other murderous adventures occur in rural England and Scotland. A reader sees an even broader sweep of aristocratic, moneyed British life, accompanied by an even wider swath of English and Scottish history. A reader also learns to thoroughly enjoy the company of Lady Darcy and Sebastian Gage, too. As one might expect, the two intelligent, high-spirited, willful people dislike one another at first, then slowly acknowledge a spark of interest. By the seventh mystery of Huber’s series, the happily-married pair are ecstatically expecting their first child. That is part of the impetus to solve the Artless Demise murders so that their son or daughter won’t be subject to the denigrating chatter that has maligned Lady Darcy for so long.  —  Ann Ronald

Also available by Anna Lee Huber: Mortal Arts; The Anatomist’s Wife; A Study in Death; A Stroke of Malice; A Grave Matter; A Brush with Shadows; A Death Draws Near; Treacherous Is The Night; This Side of Murder; Penny for Your Secrets; The Deadly Hours; A Pretty Deceit; A Pressing Engagement; Secrets of the Mist; A Wicked Deceit 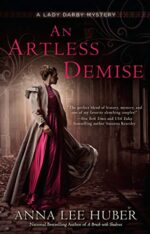 Ann Ronald is a retired English professor from the University of Nevada, Reno. Author of dozens of reviews, she’s also written a number of books about the American West. They include literary studies such as The New West of Edward Abby and Reader of the Purple Sage, cultural studies such as GhostWest and Oh, Give Me a Home, and nature writing such as Earthtones: A Nevada Album. Her latest is a work of fiction, Friendly Fallout 1953. Since retiring, she’s been reading vociferously, so “Bookin’ With Sunny” is giving her a wonderful opportunity to share thoughts about her favorite new discoveries.
More from this reviewer
PrevA Banquet for Hungry Ghosts – Revisited
How Much of These Hills Is GoldNext